The first artel in the village was founded in December 1921. There were two TSOZs in the village (named after Ilyich and another named Petrovsky), on the basis of which in 1930 the collective farm named after Ilyich was created. Three families were dekulakized. In 1932, Hryhorivka machine and tractor station was organized. At that time, the villages of Hryhorivka and Matiashivka were part of one village council of Obukhiv district; there were about 390 yards and about 2200 inhabitants.

During the Holodomor of 1932-1933, 250 people were starved to death in Hryhorivka and 112 people in Matyashivka. Vasyl Ivanovych Petlovanyi, a resident of Matiashivka, compiled a complete list of those tortured by starvation, but after his death the lists were lost. 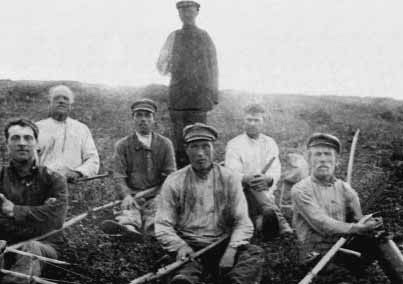 Photo: Collective farmers of the Hryhorivka collective farm named after Ilyich in the spring of 1932. In 1933, they all died. In the center, Lyksandr Kripkyi is sitting. In the summer of 1932, he and his wife, Stepanyda Maksymovna, died of sunburn under on the collective farm field, and three their children, Hania, Andriiko, and Mykolka, died of starvation.

Mass graves of the Holodomor victims are located in the local cemeteries. Commemorative crosses were erected there in 1996 and 2005.