The places of mass burials of Holodomor-genocide

On the map of current territory of Ukraine, the places of mass burials of Holodomor-genocide victims, the monuments and memorial signs, commemorating the victims, are marked.

The search is possible by region, district or the settlement. 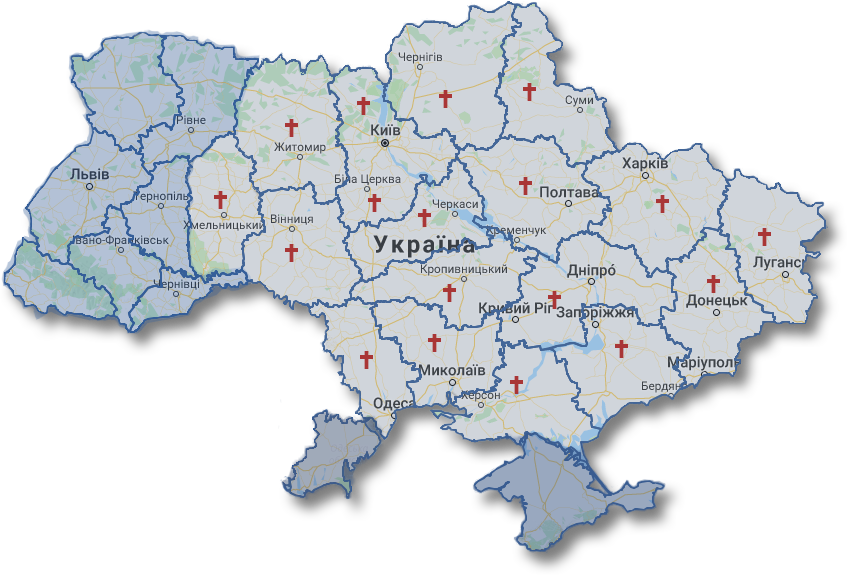 Because of Holodomor Ukraine has lost 7 to 10 million people. Whole families were dead. The villages were abandoned. The death was not treated as something unusual. Exhausted by the long-term starvation peasants did not have enough strengths for burying their relatives, who died from starvation. Non-buried corpses had been lying in the houses for several days. The bodies of dead peasants who were looking for the rescue in the cities, but did not find it, appeared everywhere on the squares and sidewalks.

In order to hide the scales of the death rates and to prevent the spreading of the diseases the local governments organized the picking and burying of corpses of dead from starvation. With this purpose, big burial pits were excavated on the local cemeteries. Also, the corpses, found on the streets, were brought to the suburban of the cities to the gullies or other natural ditches. Often the bodies of the dead were buried in secret, at night, without coffins, with no traditional rituals. At the mass graves no memorial signs were installed.

Denying the fact of Holodomor in Ukraine, the occupational Communist regime was carefully hiding the places of mass burials of genocide victims. For this purpose, on the mass graves the city parks of entertainment were created, the enterprises were built, the roads were laid. The areas on the village cemeteries were covered by grass, because they were not attended to. However, the survivors always remembered about the location of these places.

The pre-trial investigation on the criminal case No. 475, provided by the Security Service of Ukraine, defined 875 places of mass burials of Holodomor victims on the territory of Ukraine. The eyewitnesses of these events still remain the main source of information. Taking into account their age, the search, describing and fixation places of mass burials of the victims of Holodomor of 1932-1933 are getting particular importance.