In 1923 Hermanivka became the center of the newly created district. However, it existed only 5 years, and in 1928 the town and villages of the former Hermanivka district became part of Obukhiv district. In 1930, there were 583 yards and 3,550 inhabitants in Hermanivka village. At the same time, three collective farms were organized: “Komsomol”, “Hliborob” and “13th anniversary of October”. At the same time, more than 15 families were dekulakized. During the Holodomor of 1932–1933, more than 600 residents of Hermanivka were killed by famine. The interviews of those who survived those terrible months and remembered the names of relatives and neighbors who died of starvation, identified the names of 102 people. 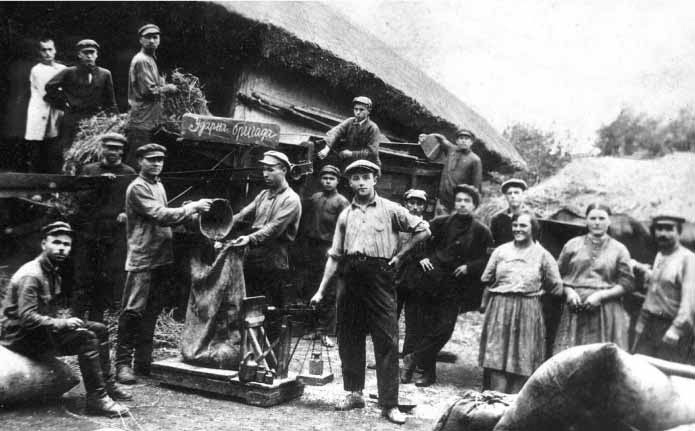 A. Kovalenko’s photo shows a 1929 grain procurement in Hermanivka. The Komsomol strike brigade (the so-called “red broom”), led by the secretary of the village Komsomol cell Mykola Topchii, (standing by the scales on the right), threshes the bread of Vasyl Sinchur to give it to the state, by a thresher taken from the kulak Hryhorii Hetman. Oleksiy Okhota, the head of the village council, is sitting on the bag on the left. In the autumn and winter of 1932, such “red brooms” swept millions of lives from Ukrainian villages. Kyiv region.

As of now, one mass grave of Holodomor victims is known. It is located in the village cemetery. In 1995, a monument to the victims of the Holodomor was erected there. Sculptor P. Deilyk.