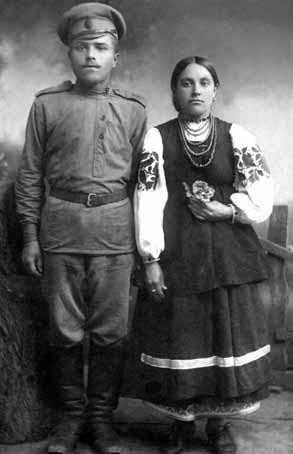 On this photo from the period of the First World War, there are residents of the village of Zhukivtsi Omelko Yakovlevych Hrab and Maria Ivanivna Karabuta, who got married in 1920. During the Holodomor, Omelko died of typhus and Maria and her four children, aged 3 to 12, from starvation.

Before collectivization, 2,490 people lived in 524 yards in the village. In 1928, the “Harvest Day” collective farm was organized in Zhukivtsi. Four families were dekulakized. About 500 people died of artificial famine in Zhukivtsi. The survey established the names of 44 people.

Currently, one mass grave of the Holodomor victims is known, which is located in the village cemetery. A wooden cross was erected there in 1997.